I've just been asked a question by way of a comment to this blog.  It's easier to reply by way of a new post.  I also haven't had anything to update on the blog for a while so this does two jobs in one.

I haven't had anything to say for a while because at the moment my code is broken.  By that I mean I'm in the middle of changing something fundamental and it won't compile, let alone run.

I don't like it when the code is in this state.  I prefer to make small changes and at the end of every day the code compiles and I can test it.  For the last few weeks it has been a mess.

I am in the process of separating the client processes from the server processes and adding all the messages to communicate between the two.

I am concentrating on just the messages to get to a state where I can compile and run the game again but just to spawn a character in to the world, the state of every part of the world needs to be sent from the server to the client and the message to say what and where to spawn.

There's been a fair bit of design and redesign but now it's mainly a lot of typing.  I'm nearly there but not quite.

As mentioned, this post is to specifically answer a question.

"I've been working on a project in which you've helped me out a lot and now I'm at point at which I'm experimenting with particles. I've seen the muzzle flash screenshots on your blog and wanted to ask how did you go about positioning the exact spot to your weapon for the muzzle flash effect."
It was asked by 49ers94 from the Xbox Live developer forums. 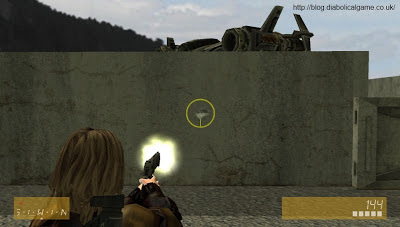 It refers not only to the muzzle flash shown in a previous post, but to the start of the projectile particle effects shown in several of the screen shots.

If you calculate that relative muzzle offset position manually for each weapon, that is all you should need to do.

One note on the particle effect.  The muzzle moves quickly as the character does but to make a nice effect the flash is not instantaneous.  I found that if the particle effect stayed still for its duration it looked odd when the weapon moved away from the still visible flash.

The solution I used was to have very short duration particles and create new particles at the new position of the muzzle each frame.  This is not how a real flash would happen but this is what I found looked best.

Coding my own Tools

I've taken it a bit further to make it easier to create and edit more weapons.  I included a visual method to adjust the muzzle position in to the model viewer that I use for my game. 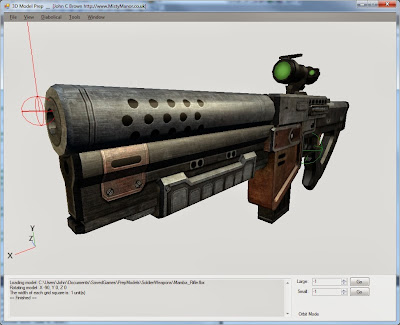 To make my life even easier I create all my weapons facing the same way and at the same scale.  I have not created all my own models but I take the model in to Blender, change its position and scale and output the model to FBX for use in my model viewer and in my game. 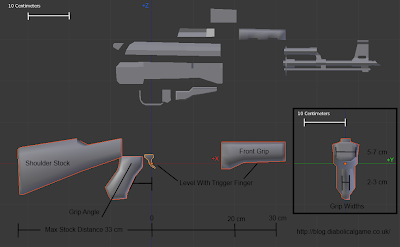 I save the relative muzzle position in to a text file for each weapon which is loaded in the content pipeline.

I think that covers everything on that topic.  Back to coding my client server architecture...  After an all day breakfast that is.
Posted by John C Brown at 14:16