This is completely unrelated to coding my game but I do need a break from time to time.  I used to have to drive for 45 minutes each way to go skating.  Now there is an excellent rink just 10 minutes from home in Maldon, Essex, UK.

I went there on Monday when it had only just opening.  Met the owner and builder.  Very nice guy and the place had a friendly atmosphere.  I think I will be there a lot.
Posted by John C Brown at 06:59 No comments:

I still don't have anything new to demonstrate but I've had a few things on the go on and off over the last week.  Small things but all moving the project along slightly.

I've resized the entire game to use 1024x576.  This helps considerably with performance on the Xbox.  Not tricky work but required every 2D texture and menu to be resized.  I did this to avoid Predicated Tiling which happens when the back buffer exceeds the 10MB of fast EDRAM on the Xbox.
http://msdn.microsoft.com/en-us/library/bb464139.aspx

I've fixed the terrain so that the texture layers display again.  That had stopped working ever since I had split the terrain up in to chunks.  It was a simple fix to clone the effect file so each chunk uses it's own shader instance.  It just needed the few minutes to look at it.

A few minor changes to the maths to allow for textures to span the boundary between chunks and for them to line up correctly.

As part of the changes to the textures I noticed how awkward my property windows are for use in the editor.  I originally created them based on the game windows.  That was OK but I decided to spend some time seeing if I could use proper Windows menus and dialogue boxes.

I have used WinForms for my TakeExtractor programme which I'll come to in a minute.  That works by having a class to simulate a game inside a WinForm application.  I want the other way round.  I want a WinForm menu inside an XNA game class.

As it happens it only took two minutes searching on the Internet and a bit of messing about with a sample app. to test it out and I have exactly what I want.
http://code.google.com/p/xna-game-menu/ 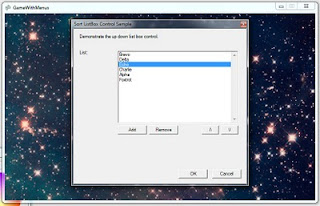 I'll be changing all my forms and menus in my game Editor over the next few days.  That will make creating maps much quicker.  I need to get some finished 3D graphics in the game so I can produce some videos to show it off.

Lastly and still on the same goal of getting the 3D graphics done, I have made minor tweeks to my TakeExtractor programme:
https://code.google.com/p/take-extractor/

I had a problem with an animation that was above the ground but in the TakeExtractor you could not tell.  I've added the option to show a floor.  That way you can judge height.  I've also changed it to add zoom in and out and basic rotation control. 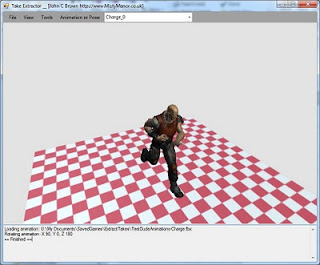 Back to the game Editor to add menus and forms now.
Posted by John C Brown at 08:28 No comments: