My wife created the logo yesterday and I got it on to the web site last night. 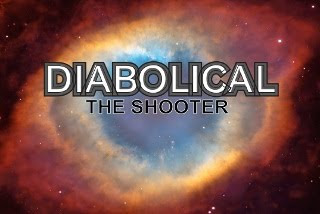 At the moment the only content is this blog. The background image and others in the game are from the Hubble Space Telescope thanks to NASA and STScI.
Posted by John C Brown at 09:03 No comments:

Over the weekend the game got a name. 'Diabolical: The Shooter'.

It's not easy to tell from the current screenshots that this will be a Science Fiction game, so I thought it worth describing the game concept.

It's set in a future where humans have travelled between stars and set up outposts and cities on remote worlds, where we have encountered a small number of other intelligent races.

The premise of this game is that human nature does not change. We still work and fight to get more of what we want. On the outer reaches there are few governments and corporations have a free hand to do business as they please. Humans, however, were not the first race to travel through space. There was a long dead ancient civilization spread through the galaxy. Anything to do with that ancient civilisation can easily be sold to the highest bidder and there is strong competition to get artifacts.

Back to what I've been doing...
I was intending to do the artwork myself but after spending far more time than I could spare to create one small object. I decided that if the game is ever to be finished to the quality I would like, then I need to get an artist to create the key assets.

I have found some off the shelf models for some characters and most of the scenery but the game needs to be unique so I commissioned a 3D model a week ago and the result is back. It is exactly what I was after. I need to do some more work before I will present it.

My main focus at the moment is map design, although I get side tracked when I need to add new features to the level editor. Things like a model to represent the spawn points or a grid to help position structures. 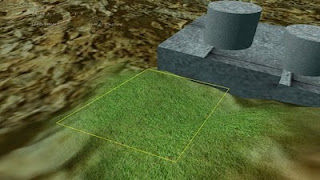 I've also improved the random noise and terrain smoothing functions and added a rectangular cursor which is useful for man made shapes like roads. 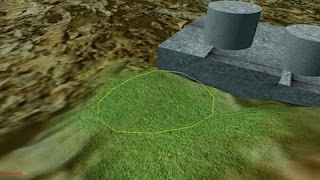 The circular one is best for hills and natural terrain.
Posted by John C Brown at 09:23 No comments:

These are the first images of the engine in development. 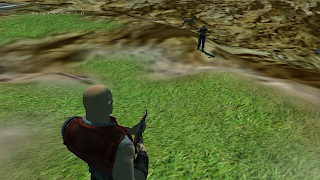 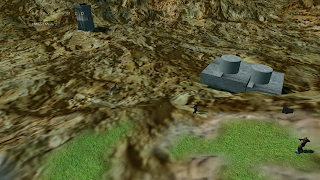 Please do not judge it yet. This is not even alpha code. I've been working on this in my spare time since March 2009. That's when I started with XNA and very shortly after had to learn a little bit of Blender to get some models in to a scene. The XNA dude shown in the screenshots is not the original from the skinning sample.
It is a duplicate transfered to Blender so I could add additional animations. 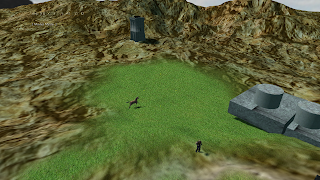 The first area I tackled was shadows however that took a lot longer than I expected. The shadows are still not finished. 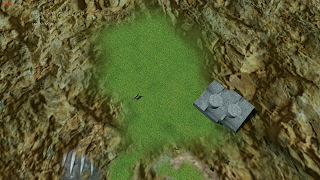 The terrain editor is a very recent addition which only took a few days to complete.
Posted by John C Brown at 09:11 No comments:

Originally I was using a web site but that was slow to manage so I've resorted to a free blog.

Any posts dated prior to this one have been moved from the previous web site.