I've been working on the controller and animations and this has led me back to character creation.

I have tried creating my own animations and although acceptable they are not as good as those I can purchase for a modest fee for use with the Unity3D Mecanim system.

In the process of trying out the purchased and a few free bundled animations with my own models I have found some shortcomings with my skinning.  To fix that I have tried Mixamo.  It did a fantastic job of adding a rig and skinning my character.

The test animations also showed where my mesh needed improvement.  Before I create a final skinned mesh using Mixamo I decided I should fix the mesh and that led me eventually to recreating the UV map for the characters head.

I have never textured a human head before so to remind me of the technique I used I decided to put it down in this blog.

There are loads of tutorials out there for UV mapping and texturing but the two I found most useful are:
For UV unwrapping: http://bgdm.katorlegaz.com/lscm_tute/lscm_tute.htm
For creating the texture for the head: http://www.3dm3.com/tutorials/maya/texturing/
This one also has a fully body tutorial but was also helpful: http://cgi.tutsplus.com/articles/game-character-creation-series-kila-chapter-3-uv-mapping--cg-26754

I am not going to go in to detail because those tutorials do that.  I am just going to mention the bits I wanted answers to.  The only thing to mention about the tutorials above is that the version of Blender mentioned is an older version. For me the standard Unwrap method created the head UV in one go without any adjustment needed. 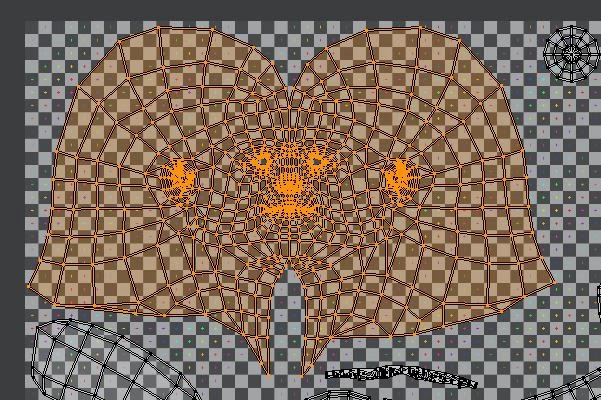 Where to create seams?
I decided:
- From just above the hairline back over the head to the back of the neck.
- From under the chin down the centre of the neck at the front
- Across the mouth
- The eyes should be separate and therefore already a hollow cutout

I tried a horizontal cut on the forehead but I found this made it difficult to add hair without a visible line. 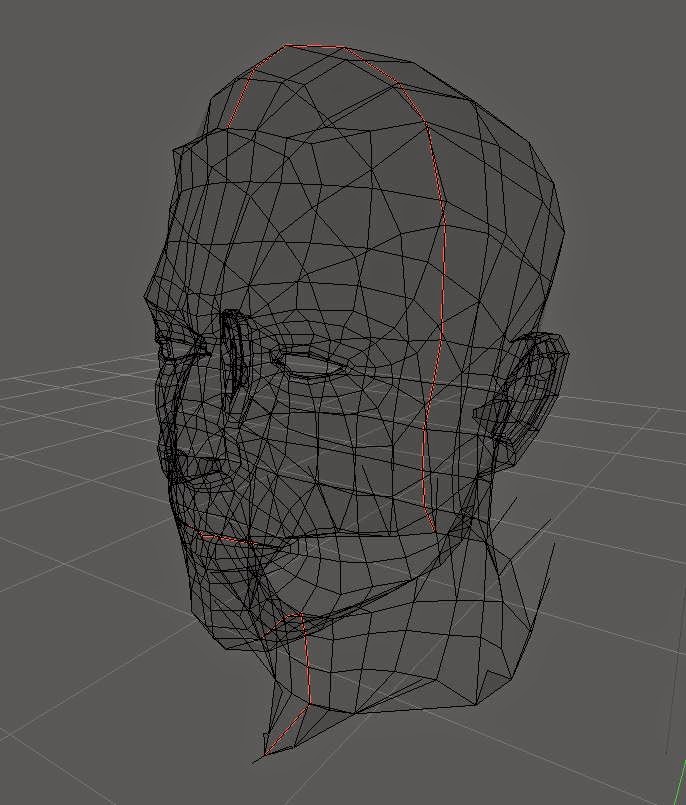 Do I separate the ears?
I had seen some examples with the ears being removed and dealt with separately.  I tried that and found the joint was visible.  For me it works best if I keep the ears attached.

Can I use a downloaded head texture created for another model?
No.  I tried adjusting the UV to fit a texture and it did not work.  It was stretched and all wrong in places.  What worked for me was to create the texture to fit the UV map as generated by Blender.  The generated UV has done the maths to minimise stretching.

Start by exporting the UV map from Blender.  You won't get very far unless you know what you are trying to line the texture up with.  The exported UV image gives you a semi-transparent texture with lines on to use as a layer in your photo editor. 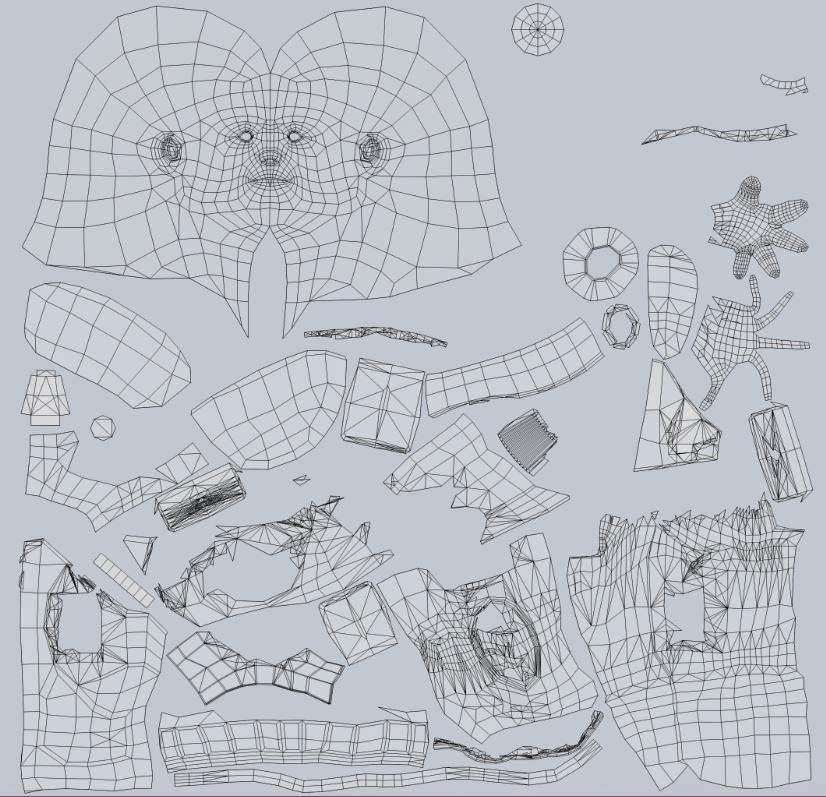 Creating the finished texture is also all about layers.

I started with a background of skin colour.  This was created using photo of a face.  Using the clone tool in Gimp I extended the flesh in all directions until I had a rectangle of flesh.  The important bit is that it retained tonal variation, so it still looked like skin.

The result was still very rough with duplicated wrinkles and blemishes.  I used various blurs and finished with a giant size smudge brush with an opacity of about 60% to end up with an even result. 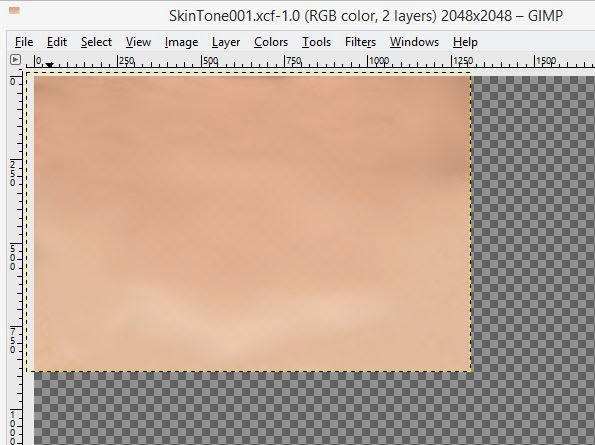 That skin is the base layer over which everything else is added.

The next layer I created was for the eyes and nose taken from a different photo of a face.  I feathered the edge by using a large erase tool with a faded edge.  It was deliberately a freehand rough cutout so the blend was more natural.  I kept the eye brows as well.

I repeatedly scaled the layer until the eyes lined up with the UV map.  I then scaled vertically to get the nose the right length.

I used small clone and smudge brushes with blurred edges to make the area round the eyes redder and remove any overlap of the eye in the photo with the UV map.  I then filled in the eyes with the same colour and smoothed the result using the smudge brush.

I added a layer for the mouth and adjusted the scale to fit the UV map.

The same with the layer for the ears. 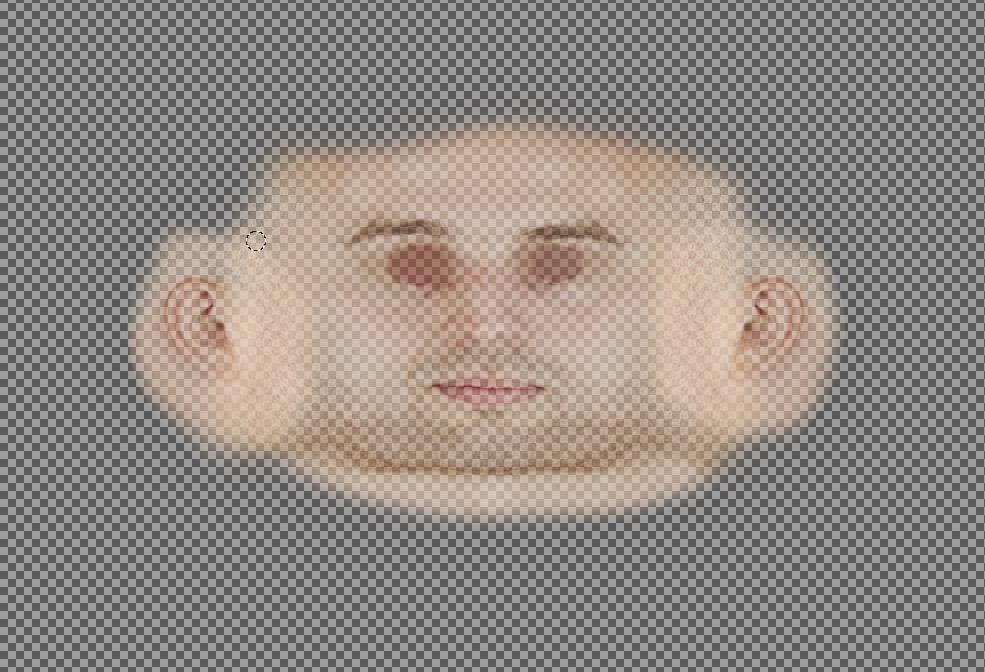 For all the added layers above the skin I set the opacity to 50% so they all blended nicely. 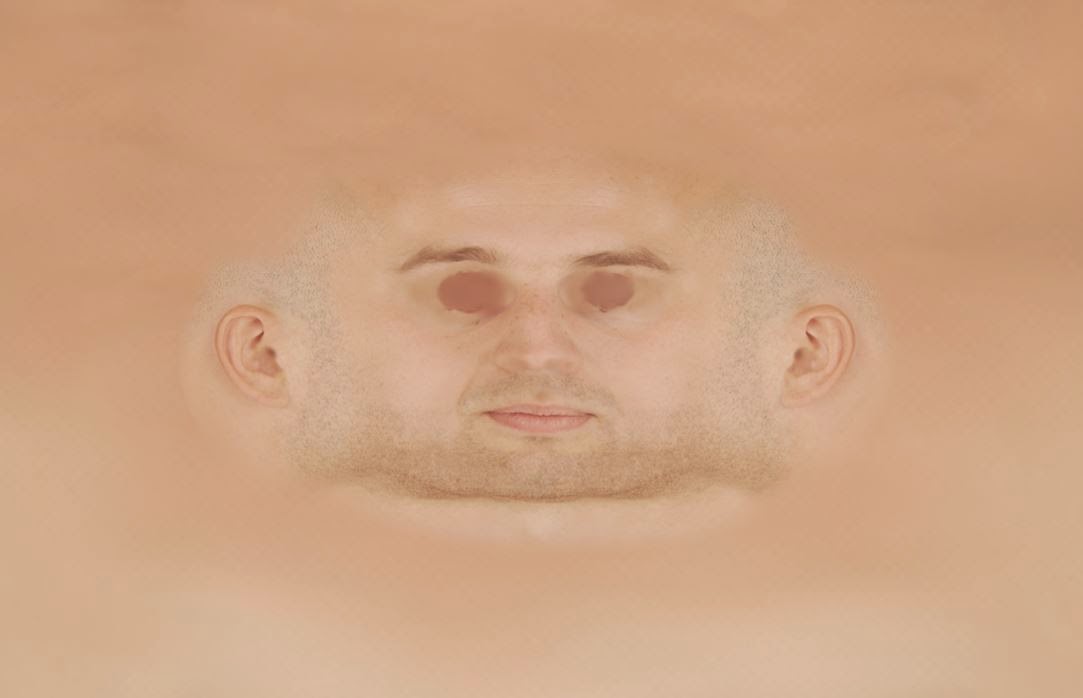 At this point I decided to try it on the model and I am pleased with the results.

I added blemishes and the hair the same way using additional layers. 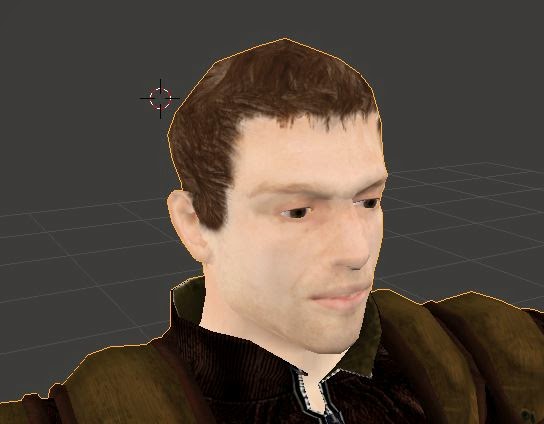 In my opinion hair looks best as a separate mesh made of strips so the hair in this texture is just a placeholder.

Now that is done I can add the rig and skinning information using Mixamo.