UPDATE: This playtest has now expired.  The forum remains for anyone interested and there will be future versions when I have made sufficient changes for more testing to be worthwhile.

I'd like to thank everyone who tested the game.  I received some excellent feedback and and am working through it all to make changes.

I have just uploaded the first version that other developers can play.

For those who may be interested please be aware that this is only available to Xbox Live Independent Game (XBLIG) developers who have a premium subscription with Microsoft.  That's the way Microsoft set up the publishing mechanism for the Xbox.  That's a long way of saying only other Xbox developers can get this download: 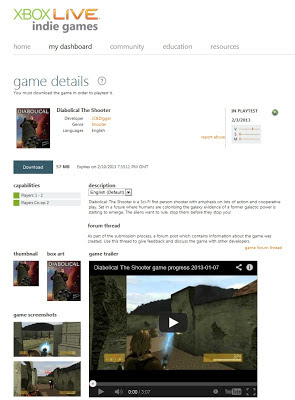 I am a bit nervous and excited because this will be the first time that anyone other than me has played it. I've demo'd older versions to a few friends before but these only had partial test levels. No one else has played a version where a level can be played through from start to finish.

The game is still a long way from completion.  Lots of the graphics need improving both in game and on the menus.  I need more player characters, more types of aliens, better animations and most importantly I need to write the network code so it can be played on line.

That's what's not there but what is there...

If you are an XBLIG developer I hope you try it out and enjoy it.

For anyone else at this stage it took about 3 hours between uploading the file and it being available to download.
Posted by John C Brown at 18:23