Over the last couple of weeks I've been designing and modelling a set of 3D structures to use as the alien interiors.  I wanted them to be consistent, sci-fi looking but also slightly alien rather than appearing like they were something a human would construct.  I'm getting there but my inspiration is limited somewhat by my technical and artistic ability. 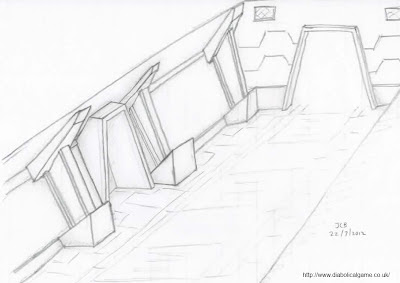 Being consistent they can all share a very few number of textures.  This has the great advantage that if they are created as one model it only needs one draw call to the graphics card to display them.  The Xbox 360 can handle huge numbers of triangles but gets much slower if it needs to make loads of draw calls.

I got a bit too carried away trying to get the minimum number of draw calls...

After having returned from the Olympic 3 Day Eventing final on Tuesday I started work on laying out another section of what will become the first level of the game.

Olympics
My wife is the horsey person which is why when the chance to get tickets to the 3 Day Eventing came up we took it.  It was a good day with a fantastic atmosphere.  Team GB got a silver medal.  The stands shook with excitement.  I was very impressed with how the whole thing was organised.  There were lots of people but still everything flowed, we quickly passed through security in to the grounds of Greenwish Park and to our seats.

The view from the stands was perfect and even with the few minutes of rain we had from time to time the brollies did not block the view.

My wife has some pictures and more info. on her blog:
http://tomandhenry.blogspot.co.uk/2012/08/greenwich-park-equestrian-eventing.html


I use Blender to create sections of the level and then import them in to the game and move them in to their final position using my own editor.
http://blog.diabolicalgame.co.uk/search/label/Editor


I've had to redo a lot of the work I did in Blender on Tuesday night.  Perhaps the excitement of the day got to me! 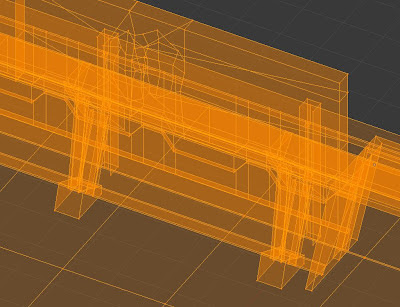 I had joined all the models together too early on and moved vertices in Blender to layout a large sections of the level.  I did this with the intention of making the draw calls more efficient but that was a mistake.  The single model is now too complex to separate and adjust sections and I had forgotten to allow for shadowing!

The Diabolical engine does not self-shadow.  This is where the triangles of a single model cast shadows on to other triangles in the same model.  I have other posts on the unsightly effects caused by self-shadowing so I won't repeat that here:
http://blog.diabolicalgame.co.uk/search/label/Shadows


3D Modelling for the Best Game Performance
Keep all models as separate component Objects so they can easily be picked up and moved about while laying out.  Combine them [Ctrl-J in Blender Object mode] at the last minute in to a smaller number of meshes that use the same texture to reduce the number of draw calls required by the game engine.

Remember to keep a copy of the source model file before the Objects are merged to make future adjustments easier.

3D Model Meshes
There is no advantage combining Objects that use different textures.  Each material will automaticaly separate to another mesh in the exported file because typically shader effect files only use one diffuse texture.

3D Modelling for Shadows
In the current Diabolical engine there is no self shadowing and this may apply to other engines.  When combining the Objects look at which Objects might cast shadows on other objects and make them separate models. 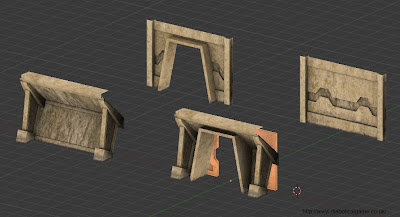 For my game engine I need to balance the performance gain from having less draw calls for the Xbox 360 against the visual quality of having shadows cast correctly on to more surfaces.