When I looked back I've been working on this guy for nearly a year on and off.  The model was a birthday present this time last year. 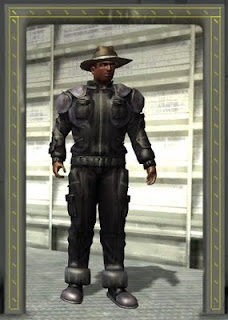 At last he is in the game.  I still have some tweaking to do to get some of the animations to line up with the in game motion but the bulk of the work is done.  The whole model also appears a bit darker than I would like with the in game lighting so I will probably adjust the texture colouring to match the rest of the models. 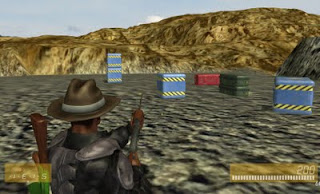 The story, still evolving, is that alien technological artifacts are being found in archaelogical sites throughout the galaxy.  Our hero is an adventurer helping to find the sites containing this alien tech.  Hired for missions by whatever galactic corporation most wants his help.  Eventually there will also be a choice of a female counterpart.

Replacing this character means that I no longer have to use placeholder models and from now on all screenshots can be in game artwork.
Posted by John C Brown at 09:33