As usual with modelling it has taken me a about three weekends to create one model.

I drew the concept on the 10th of December and put the final touches to the finished weapon and added it to the game on Christmas Eve. 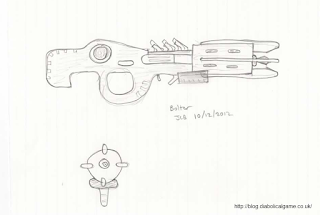 It's inspired by, in fact deliberately similar to, the alien style weapons pack I purchased from Garage Games.

That set only includes 3 models and I needed an additional larger support weapon for the aliens. 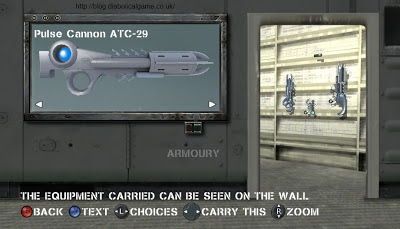 I am getting the hang of 3D modelling and the basic untextured model only took a day.  What takes all the time is the UV unwrapping and then the texturing.

I always start by creating the Ambient Occlusion layer for my texture. 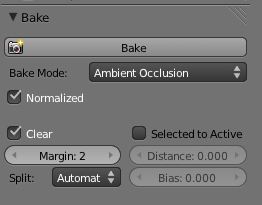 It does not help that I have to do some bits twice because I forget to set some parts of the model as smooth before creating the Ambient Occlusion (AO).

Without using the smooth option on parts of the model that are curved, the AO shading is banded instead of continuous. 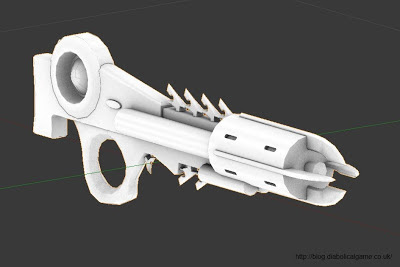 I always like the model with the AO texture.  Shame I can't leave it that way.  I have seen a game where that was the style of the game.  It looked very good but not what I want for Diabolical: The Shooter.

If my artistic skills were better I would be able to create the texture quicker.  I have to put most of it togther from parts.  More like contruction than drawing.  I go through each part, as split by the UV unwrapping, and add details as separate components and blended in to the base colour.  Layer after layer after layer. 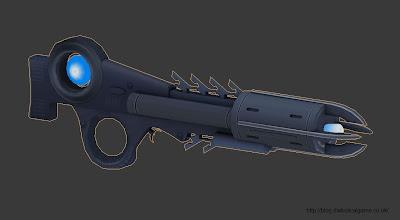 I am starting to learn some of the techniques but it takes me time.

For some reason it ended up grey but for this model I wanted it a more silver colour to match the others.  I used a bit of brightness but mainly I adjusted the gamma correction curve to get something more silver. 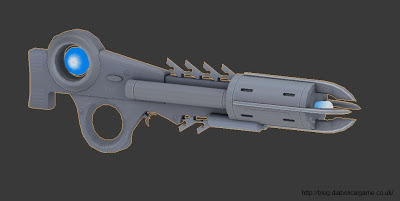 The in game lighting adds a bit more shine to the surfaces. 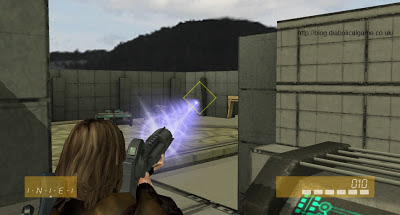 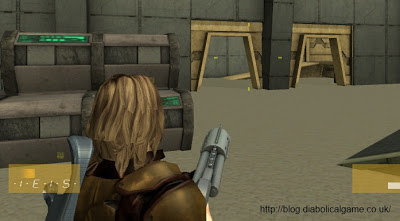