Every shooter needs a BFG.  In this case it will probably be this rocket launcher.

That was the concept I drew a few weeks ago.  I've been thinking about it for years, on and off.

3D modelling, as I've mentioned before, takes a long time.  The time spent at the computer to turn that idea in to the the finished model ready to use in game has taken over 20 hours of work. 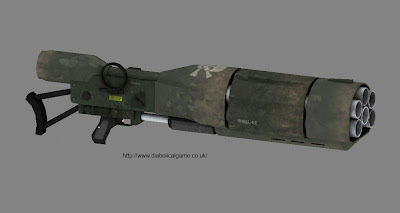 Where possible I want to use off the shelf models to save time.  I have managed to find plenty of sci-fi environments that will be ideal for my levels but there are no sci-fi weapon sets that match the style of the game I want.  In fact there are hardly any sci-fi weapon models at all and even less that are of low enough poly count to use in my game.

The above model has a few over 2900 faces.   I would have been happy with anything less than 4000 polygons but I like to keep everything to a minimum.  In my opinion the more important bit is the quality of the texture.

The time works out at about 6 hours modelling, 6 hours UV unwrapping and the rest of the time creating and applying the texture.  I mainly use GIMP for that with lots and lots of layers.  At the moment I'm using a 2048x2048 texture but if the Xbox 360 struggles with too many of those I'll drop it down to 1024x1024 before the game is released. 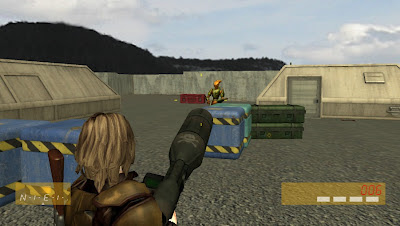 I managed to sort out some bugs on the next bit of code I'm looking at.  I want to be able to test multi-player without dealing with the networking troubles at the same time.  Therefore I need split screen. 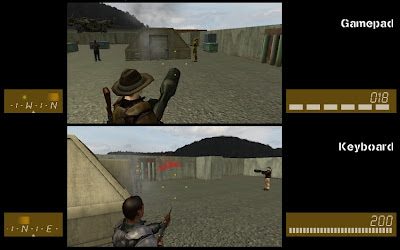 The screenshots are all taken on the PC and I use an Xbox game pad connected via the wireless adaptor for one player and the keyboard for another.  I managed to sort out a bug which had been preventing it from displaying on the Xbox 360.  Now I know the concept works on both the PC and the Xbox I can sort out the other details.

On the Xbox 360 the names in the top right corners of each view show the GamerTag names.

Despite it not being anywhere near finished my wife and I still found it great fun on the Xbox to run round the level together shooting at each other and the alien.

It's starting to feel like a game rather than just a project.
Posted by John C Brown at 18:49