I hadn't posted for a while so I thought I'd give a quick update.

I have the first of my player characters ready to animate. To get from the stage of receiving the model from the artist to being ready to animate has taken two weekends with lots of 3D editing and I also decided that before I animate this model I would tidy up some of the game code that is used to move the models.

I've changed the importer to rotate the model for me rather than applying a matrix rotation every frame. I've also changed the way weapons are held.

Back to the animations. My plan is that all of the same type of model will use the same animation keyframes. This means that each model file is smaller because the animations are stored separately.

The disadvantage is that every model has to start off in the same pose and have the same armature. The armature is the skeleton used to animate an organic model. It is also referred to as a rig.

During development I have changed things that affect the skeleton several times or at least changed what I need from the rig. This time I have added an extra bone for the weapon to attach to. Previously I had attached the model directly to the hand but although this worked it made it very difficult to line up which way the weapon was facing with the position of the hands holding that weapon.

This is the skeleton and the bind pose I have settled on. 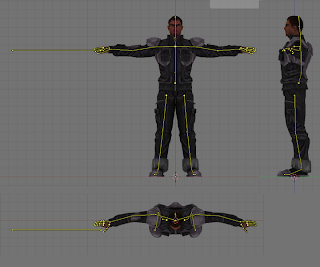 This will be the third time I have done the animations and I would like it to be the final one. I am not an animator. I have had to learn animation almost from scratch so it takes me a long time to get it right.
Posted by John C Brown at 09:16