As I had been tinkering about with the HUD design I decided to use a similar style for the game menus.

This led me on to notice that the controls on the various menu screens were not consistent. My initial idea over a year ago had been to try to minimise the number of buttons that needed to be pressed. It sounded like a good idea but it ended up with the screens not being consistent. You had to carefully look at the controls on each menu screen before you knew what to do!

The new version works the same on every screen. 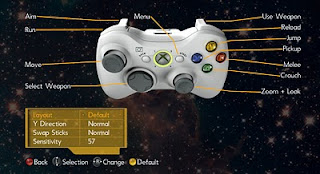 I spent the weekend going through all my menus and making them use the same controls for the same things which inevitably led back to the same way all other games work. I should have just copied everyone else in the first place. Well you live and learn.

Each option is up and down and to change each value you use left and right. B always goes back and saves if necessary.

Frustrating re-working things but I have taken the opportunity to tidy lots of things up and create some controls classes for drawing the buttons and some frames on the menus. When I create the next screen it will be so much easier.
Posted by John C Brown at 14:50